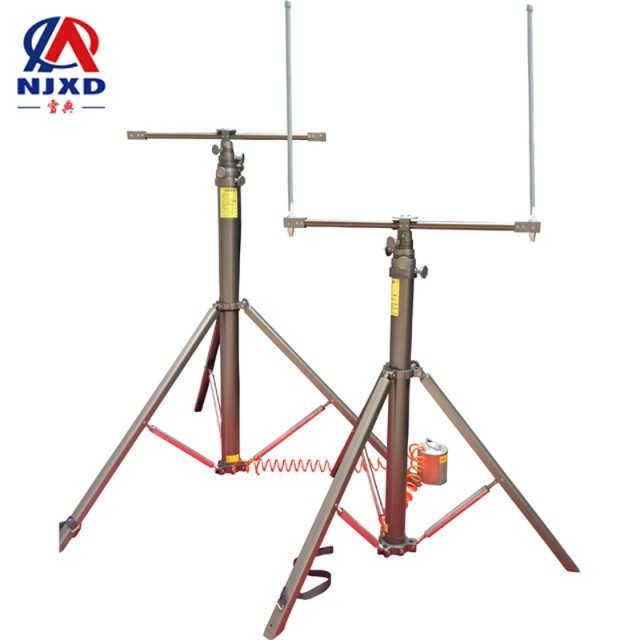 A system consisting of a transmitting antenna and a receiving antenna. The former is the transmission mode converter of space electromagnetic wave which converts the RF current or electromagnetic wave of the traveling wave mode into the diffusion wave mode; The latter is the transmission mode converter of its inverse transformation.
History
The development process of antenna is closely linked with the development of radio technology. Various types of antennas are designed to meet the practical requirements proposed at that time.
The first antenna is German H.R. Hertz verified British J.C in 1887. Maxwell proposed the theory of the existence of electromagnetic waves and designed "> transmitting antenna is two balls which are close to each other, using the spark discharge between the two balls to generate electromagnetic waves. Loop antenna for receiving antenna. In 1901, Italy's G. Marconi was the first to use a large antenna to realize ocean-going communication. The practical first T-type transmitting antenna adopts 50 drooping copper wires, and the top is connected with horizontal lines and hung on two supporting towers.
The main application of early radio was long wave transoceanic communication, and the development of antenna focused on long wave band. Long Wave antenna is characterized by high bearing power, large structure and low efficiency.
After 1925, radio began to prevail, and omnidirectional medium-wave antenna gradually developed. The earliest medium-wave antenna is T-shaped, inverted L-shaped and umbrella-shaped antenna. In order to overcome the over-amplitude modulation distortion caused by the fading of sky wave interference, the cable-type and self-supporting tower antennas are designed. The height of the vertical antenna can not only be made very high, but also the energy of the vertical polarization wave can be more concentrated to radiate around along the direction of the ground, and the radiation of the high elevation angle horizontal polarization wave can be reduced, it weakens the influence of sky wave fading and expands the effective coverage of ground wave.
Around 1925, it was found that short wave long-distance communication could be carried out by using ionosphere reflection, and the required power could be greatly reduced, so directional short wave antenna developed rapidly. Various types of horizontal antenna and antenna array are designed, including in-phase horizontal antenna, double wave antenna and broadband traveling wave rhombus antenna.
Although the wave channel Antenna (commonly known as Yagi antenna) was put forward by Yagi and Yutian in Japan around 1927, until 40 years later, with the solution of oscillation source and the development of ultra-short wave communication, yagi antenna has been developed and applied. As early as 1888h. R. Hertz put forward the idea of parabolic reflector antenna, which was not put into practice until 1937. Horn antenna was produced with the development of waveguide technology in 1930 s. During the Second World War, due to the development of radar technology, microwave antennas developed rapidly accordingly. Parabolic antenna. Lens antenna, dielectric rod antenna, slotted antenna and so on have all made progress in different degrees during this period. Among them, the development of parabolic antenna is particularly prominent, including the design of Illuminator, beam scanning and generating shaped pattern, etc.
After the Second World War, with the development of microwave relay communication, ultra-short wave mobile radio, television broadcasting and radio astronomy, and the rise of scattering communication, monopulse radar, synthetic aperture and other technologies, broadband bat-wing TV transmitting antennas, microwave relay periscope antennas, quasi-frequency variable logarithmic periodic antennas and equiangular helical antennas have appeared one after another. In the late 1950 s, after artificial satellites and intercontinental missiles appeared one after another, because of the urgency of arms competition and the need of electronic countermeasures, besides requiring antennas to have high gain, high resolution, fast scanning, in addition to the high parameter performance such as accurate tracking, the antenna is also required to have the characteristics of circular polarization, broadband, multi-function and conformally embedded to meet the needs of aircraft. From the 1960 s to the early 1970 s, the main achievements of antenna development include: ① the new construction and improvement of large earth station antenna: including the correction of Cassegrain antenna, feed source, main and secondary reflection surfaces, the application of Beam waveguide and other technologies; ② phased array: due to the improvement of phaser, the application of electronic computers, the rapid response of remote alert and the simultaneous search and tracking of multiple targets and other requirements, it has been greatly developed; ③ many large radio telescopes with typical representative significance. In addition, in the aspect of small aperture antenna, such as loading antenna, backfire antenna, active antenna and antenna on aircraft (including aircraft, rocket, missile and satellite) also made important development in this period.
In the 1970 s, with the development of radio technology towards millimeter wave, submillimeter wave and even light wave, frequency reuse, orthogonal polarization, near-field measurement, multi-beam and partial focus bias, signal processing of array antenna, synthetic aperture and adaptive antenna are also paid attention to and developed accordingly.
In the 1980 s, the development trend of antennas in addition to continuing to explore and improve the type and performance of antennas in the developed band, a large number of research work gradually turned to the emission and reception of transient electromagnetic waves, research on scattering and inverse scattering of target, solution of boundary value problem of electromagnetic field, radiation and scattering of antenna in special medium, etc. 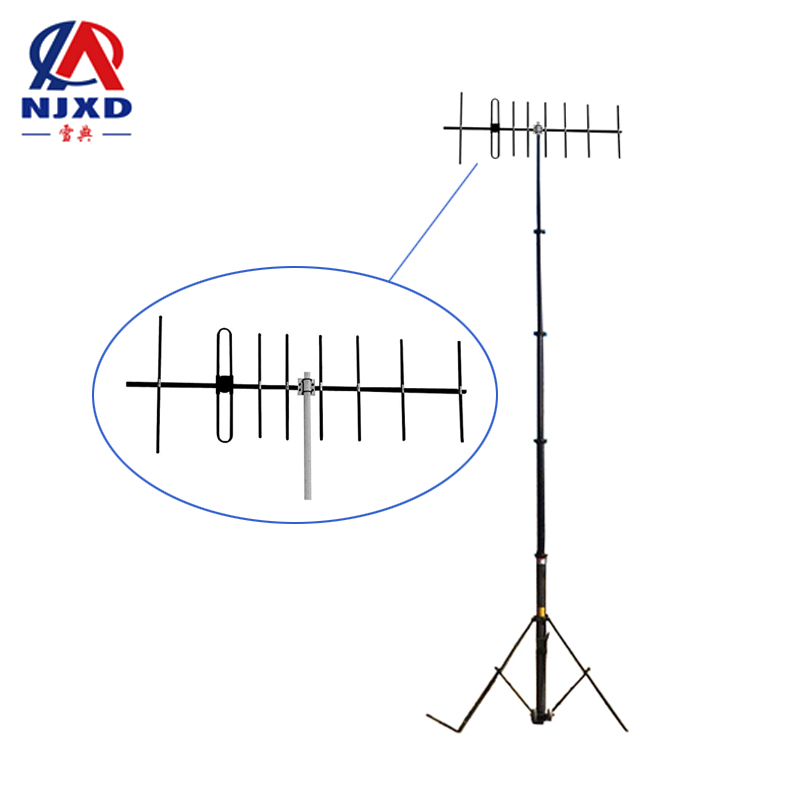 Definition
The transmission mode converter of space electromagnetic wave which converts the RF current or electromagnetic wave of the guided wave mode into the diffusion wave mode, and the transmission mode converter of the inverse transformation. As a transmitting antenna used for the conversion of traveling wave-diffusion wave mode, the receiving antenna I, which is used for the conversion of diffusion wave to traveling wave mode, can be replaced except that the power bearing capacity and voltage bearing capacity of the transmitting antenna are much greater than that of the receiving antenna, and the basic characteristic parameters of the antenna remain unchanged, which is called reciprocity theorem. Another important function of the antenna is to concentrate the electromagnetic wave energy, that is, to concentrate the energy in the transmitting direction when the transmitting antenna is used, and to reduce the energy in other directions at the same time; When the receiving antenna is used, then, more energy can be intercepted from the incoming waves in the receiving direction, while the incoming waves in other directions reduce the input energy by phase cancellation. This is the directivity of the antenna. Compared with the non-directional antenna, the increasing multiple of the energy concentration is called the gain of the antenna. The extended meaning of antenna directivity is negative gain (attenuation) in non-communication direction, which can be used to describe another related performance index of antenna, namely, side lobe (interference) of transmitting antenna. Radiation suppression degree or wave interference suppression degree in non-communication direction of receiving antenna. Classification
It can be divided into two types according to the working properties: transmitting antenna and receiving antenna. It can be divided into communication antenna, broadcast antenna, radar antenna, etc. It can also be divided by wavelength, long wave antenna, medium-wave antenna, short wave antenna,....... The above classification methods all have the disadvantages of one thing and two genera. A relatively perfect scientific classification method is divided into two categories: line antenna and surface antenna according to the principle and structural characteristics of antenna. The wire antenna is composed of wires whose wire diameter is much smaller than the wavelength. The length of the wire is much larger than the cross section and can be compared with the wavelength. This structure is difficult to achieve in the microwave section, and the gain is much lower than that of the surface antenna. Generally used for long, medium, short wave and ultra short wave. The surface antenna consists of a whole metal plate or wire grid to form the reflective surface of the antenna. Its area is much larger than the square of wavelength, and its gain is much higher than that of line antenna. This structure is difficult to be realized in long, medium and short wave segments. The support of wire antenna is generally rod or tower, and the support of surface antenna is Tower or desktop. 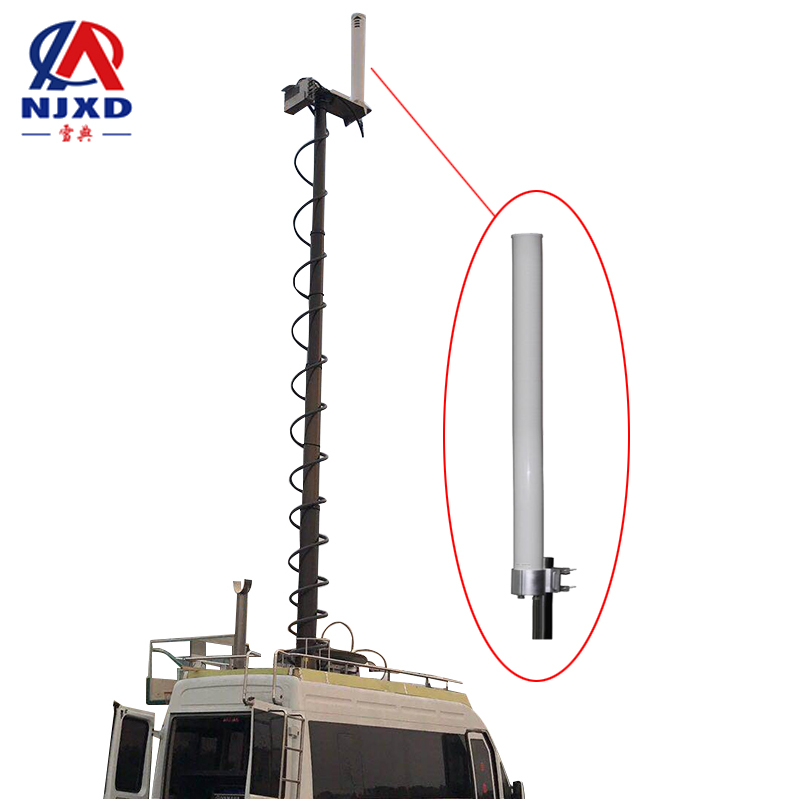